Who conducted the search or seizure?

With all the complexities of search and seizure law, it easy to lose sight of its most basic tenet: The Fourth Amendment applies only to searches and seizures conducted by the government or its agents. A privately-conducted search, no matter how unreasonable, does not violate the Fourth Amendment. To illustrate, a postal employee, curious to know what’s inside a parcel, opens it and finds a bag of narcotics and calls the police. The search by the postal employee does not violate the Fourth Amendment as it constitutes a private search. This would even be the case if the employee opened the parcel with the intent of stealing its contents.

An interesting question arises as to what would happen if the postal employee in the above illustration repackaged the parcel and gave it to the police to open? The answer is the same result. The reason being is that the initial invasion of the property was occasioned by private action. Some have coined this type of search as a “cat out of the bag” search because the property owner’s privacy interests forever evaporated when the contraband was discovered by private action before the police conducted its own search. 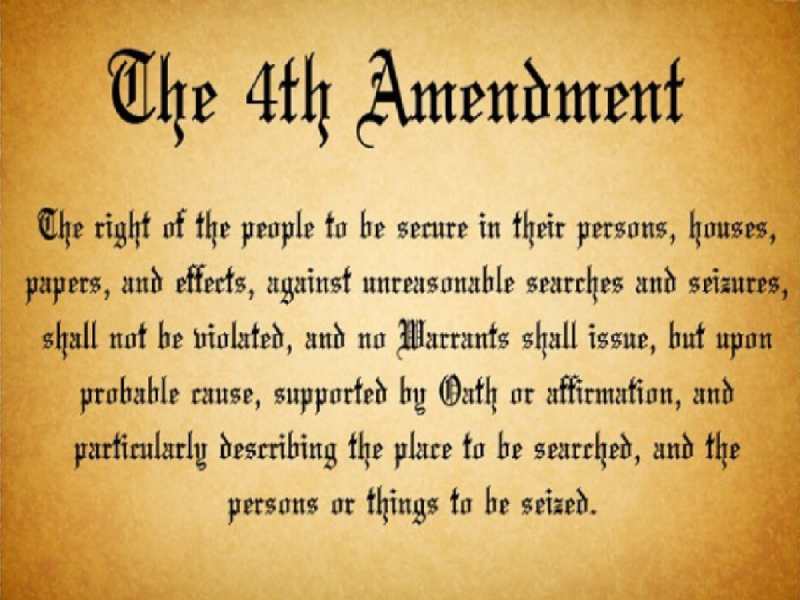 Did the search involve a protected area?

The important issue here is knowing that the government cannot search protected areas without consent or a warrant. The most protected of all areas is a person’s home. However, while it’s clear that government agents cannot enter or search a person’s home without consent or a warrant, what about the “curtilage” attached to and surrounding the home? Surprisingly, it too is protected to the same extent as the home itself. Thus, for example, walkways, side and back yards, and driveways all enjoy the same privacy interests as the interior of the home to which they belong.

There are limitations to protected areas of curtilage to be aware of. For example, areas of a person’s home where the occupant is normally contacted is not a protected area. In most cases, this is limited to the front door area but may include other or different areas depending on the construct of the home and how it is used. This exception allows for “knock and talks” and routine service calls.

Did a search or seizure take place?

This question seeks to get at whether there was a reasonable expectation of privacy or if the government trespassed into a protected area. If there was no expectation of privacy, then a search did not occur and there is no Fourth Amendment violation. Conversely, if government agents trespass into a protected area, an unreasonable search is deemed to have occurred in violation of the Fourth Amendment.

For a person to have a reasonable expectation of privacy, they must have a subjective expectation of privacy under the circumstances and society would consider that expectation to be reasonable. In the famous Katz Telephone Booth Case (Katz v. U.S., 389 U.S. 347, 1967), the police were eager to listen to the suspect’s calls made from inside a telephone booth. But the suspect was careful to close the booth’s door completely and speak in a low voice as to keep his conversations private. The police, unable to hear anything by eavesdropping, attached a listening device to the top of the booth on the outside. The court held that under the circumstances the suspect had a reasonable expectation of privacy and thus the police conduct of attaching a listening device to the telephone booth constituted an unreasonable search in violation of the Fourth Amendment.

Was there consent, a recognized exception, or a warrant?

A search does not violate the Fourth Amendment if consent was given or if it was conducted pursuant to a valid warrant. However, a search conducted with neither consent nor a warrant may still be deemed reasonable under the Fourth Amendment if a legally-recognized exception applies. Some of these exceptions include exigent circumstances, hot and fresh pursuit, community caretaking, and patdown searches (also known as Terry Stops). Other exceptions include border searches, DUI checkpoints, and regulatory searches.

Another exception is investigative detentions. For this exception to apply, the government must have reasonable suspicion of a crime. So long as there is reasonable suspicion the detention does not violate the Fourth Amendment. However, the moment reasonable suspicion is dispelled, any further detention, even if very brief, without consent violates the Fourth Amendment. In other words, once suspicion dissipates, the investigative stop is over and the suspect must be released or converted to a consensual encounter. To illustrate, if the police ask a suspect for their identification to confirm their age, but hold the identification longer than necessary to confirm the suspect’s age in order to obtain other identifying information to run a warrant check, the suspect will be deemed to have been illegally seized in violation of the Fourth Amendment.

Is illegally-seized evidence subject to an exclusionary rule exception?

The exclusionary rule holds that evidence seized pursuant to an unreasonable search in violation of the Fourth Amendment is inadmissible at trial. The reasons for the rule are to deter police misconduct and instill public trust in the government. However, there are a number of exceptions to the exclusionary rule. Some of these include inevitable discovery, good faith, child protection, and independent discovery. Other exceptions include grand jury proceedings, sentencing and revocation hearings, and deportation proceedings.

Warrantless search exceptions and exclusionary rule exceptions, while independent legal doctrines, are essentially opposite sides of the same coin. Together they cover a vast array of government conduct – including both legal and illegal conduct – that allow evidence to come in that was obtained from warrantless searches.

Search and seizure continue to be one of the most litigated issues in criminal law. It is governed by myriad rules and standards that challenge even the most seasoned practitioners. However, the analysis can be simplified by asking a few pertinent questions about who the actors are, what are the protected areas, whether there was an expectation of privacy or a trespass, and are there exceptions to either the search conduct or the admissibility of illegally-seized evidence. Law enforcement conduct that veers outside the guardrails established by the Fourth Amendment is commonplace and inevitable. While these violations are mostly unintentional, the burden is on defendants and criminal defense attorneys to be vigilant and able to recognize violations when they occur and to advocate for proper remedies.